What it’s about is the same theme – or perhaps call it a motivating force – that you find in many Shakespeare plays and sonnets: the effect of Time…on love, on the body, on friendships, on all of it. 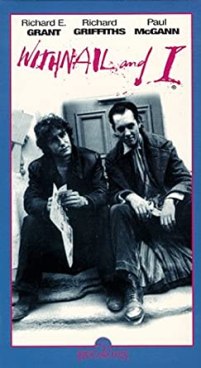 As we mentioned Shakespeare, the film is but a stone’s throw from Hamlet. In both dramas, there’s very little action. Nothing much transpires. It feels as if both plots unravel in a hermetically sealed, private universe. Both have to do with the mind, with mental illness, with delusion, with Time. The last line spoken in the film, by Withnail, comes from Hamlet. “What a piece of work is a man.” Withnail’s audience for the impromptu performance consists only of a few wet wolves in a zoo. What an appropriate, if somewhat sad denouement.

We have two actors, Withnail (Richard E. Grant) and I/aka Marwood (Paul McGann). They share a flat in Camden Town. They have no money – zilch. Withnail is a flamboyant, self-loathing alcoholic who also never says no to other drugs. Finally, Marwood is contacted by his agent – informing him of possible work in Manchester – so he will have to move on. The dynamic duo breaks up – in the pouring rain of course.

This is a coming of age film that somehow, skillfully, is never mawkish or melodramatic.

Its comedy is certainly dark but rarely severe. There’s gentleness to the affair; the lighting is mostly soft, and at points unreal. Marwood is pushed forward by unseen hands, into the future, leaving Withnail behind forever, we assume, a lost soul borne back ceaselessly into the past.